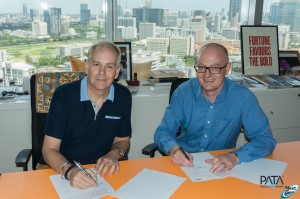 Bangkok, THI – The Pacific Asia Travel Association (PATA) and The Code of Conduct for the Protection of Children from Sexual Exploitation in Travel and Tourism (The Code) have agreed to cooperate in the promotion of child protection practices among tourism companies in the Asia-Pacific region.

The Memorandum of Understanding (MoU) signed in May 2014, outlines plans for PATA and The Code to work together to raise awareness of the crime of child sex tourism and further promote The Code. The MoU also offers PATA members the opportunity to join The Code and take advantage of a discount on its annual membership fee.

Andreas Astrup, General Manager of The Code, said: “Regional travel associations such as PATA have a long reach. We are thrilled that PATA will use its voice and influence to promote the essential work of The Code and help protect children in tourism.”

As the first regional tourism association to partner with The Code, PATA is leading the way to a more responsible tourism industry worldwide. Mario Hardy, PATA’s Chief Operations Officer, hopes that many PATA members will join The Code.

“As taboo as it may be to talk about, the sexual exploitation of children is a problem in some of the regions we operate in. When our members join The Code they will be supported to take concrete actions to protect children while also reassuring their customers that they are socially responsible,” said Mr Hardy.