OARS is pleased to announce the premiere of Return from Desolation, a new short film about a war-veteran-turned-river-guide’s fight for redemption and balance through the wild rivers and public lands within Utah’s Desolation Canyon. The film, from award-winning director Justin Clifton, and supported by YETI, Chaco, NRS, and Sierra Club, will premiere at the 2018 Wild and Scenic Film Festival in Nevada City, California. 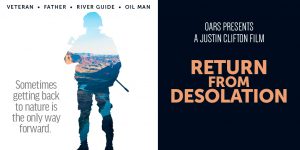 After returning from Afghanistan, Garrett Eaton was dangerously close to losing his family and his life to addiction when he found a river guiding program for American veterans. Trading the ups and downs of daily life for the twists and turns of the wild serpentine rivers of the American Southwest, Garrett immersed himself in nature to regain his sense of calm and make peace with his demons. Noticing the benefits of wild places, Garrett became a part-time rafting guide, and now splits his time between Desolation Canyon, Utah and the oil fields of North Dakota. His double life raises eyebrows at both of his places of work, but through this arrangement, he can bring home a paycheck and a rejuvenated heart to his wife and four children. Slowly finding his way back from the brink, Garrett rediscovered what he has been fighting for deep in the canyons of Desolation.

Desolation Canyon remains one of the most remote and rugged stretches of river in the American West. Situated near the Dinosaur fossil beds and one of the nation’s largest natural gas deposits, “Deso,” as it’s lovingly called by seasoned river runners, is caught in the middle of a battle to keep public lands in public hands and the oil and gas industry’s interest in extracting the abundant natural resources that exist on the rim. Or as Garrett says in the film, “there’s oil and gas all over this joint, but this place here; this is special.”

“We believe we have an opportunity to shift the conversation about our public lands toward a less polarized, more common understanding and vision. For Garrett, and many others, these places gave him something to fight for — and ultimately saved his life.” Steve Markle, OARS VP of Sales and Marketing, said. “We believe we owe it to those who came before us, to ourselves, and to future generations to ensure that wild and uniquely American landscapes like Desolation Canyon remain safeguarded now and forever — and accessible to all.”

After its premiere at Wild and Scenic Film Festival this month, Return from Desolation will screen at festivals across the country and OARS expects to release the film online in early June. For more information on the film and to watch the teaser, visit: desofilm.com.

1 Comment to OARS to Premiere New Film, Return from Desolation