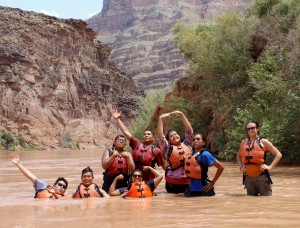 Last year, O.A.R.S. launched a powerful partnership with the National Park Foundation, the official charity of America’s national parks, to open up the great outdoors for kids around the country and inspire the next generation of park stewards.

“The centennial is more than a celebration, it’s an opportunity for us to launch the strongest second century for the National Park Service and leave an incredible legacy for our nation’s children,” said Angela Hearn, interim senior vice president of marketing, communications, and corporate partnerships at the National Park Foundation. “We’re grateful that our partnership with O.A.R.S. gives kids and young adults the opportunity to connect with national parks through unforgettable guided overnight wilderness trips.”

As part of this unique partnership, O.A.R.S. has donated five guided multi-day trips in the last 12 months to America’s youth from underserved communities across the country, including trips in Grand Canyon, Grand Teton and Canyonlands National Parks. To date, more than 50 kids and young adults have benefited from the program.

“It’s the way leaning should be—hands on, dirty, filled with fun and fear and friendship under the blue sky and starry nights. Nothing feeling forced, everything just flowing like the river through ten thousand twists and turns. A lesson learned at every bend,” One educator remarked on a recent trip through Cataract Canyon in Canyonlands National Park.

“O.A.R.S. provided an incredible, unforgettable outdoor experience for 16 urban Latino high school youth—most of whom had never been camping or rafting. The O.A.R.S. guides taught the kids how to be comfortable outdoors,” Jeanette Shackelford, Youth Program Lead for Bureau of Land Management, Utah State Office, said about a recent 2-day river trip on the Colorado River outside of Moab, Utah. “The students talked about how much they learned—and never stopped raving about the mac-n-cheese O.A.R.S. served for dinner the first night!”

Donna Richardson, Chief of Interpretation and Resource Education for Grand Canyon National Park, joined a group of Hualapai and Hopi students on a 4-day Grand Canyon rafting trip in 2015 and said, “I cannot speak highly enough of O.A.R.S., the program, and most importantly the experience these young adults were able to have because of O.A.R.S.’ generous donation. It was a very powerful and fulfilling experience for them. It was the first time for each of the participants to be on the river and experience the canyon from the river perspective. Most importantly, it allowed native youth to experience the canyon in their own personal ways… It was one small step in providing them the opportunity to connect to the Grand Canyon as Native Americans, as well as our next generation to care for these special places.”

Late Founder and President, George Wendt, launched O.A.R.S. in 1969 after he realized that many of America’s special wild places were under threat. He made it his life’s purpose to share, fight for, and preserve our public lands and wild rivers for future generations.

“The first wilderness experience for these kids is the beginning of what we hope will be a lifetime love of the outdoors. George often said, ‘we save what we love and we love what we know.’ It’s up to all of us to make sure that our kids and grandkids get to know wild places, wild rivers and a sense of adventure—and that starts in our national parks,” said Steve Markle, O.A.R.S. Vice President of Sales and Marketing. “This isn’t just about opening the doors to nature, it’s about sparking a connection to our heritage and culture, it’s about building community—and empowering America’s youth to carry on a legacy we can all be proud of.”

In addition to an in-kind donation of nearly $95,000, O.A.R.S. is donating one percent of company sales from national park trips to the National Park Foundation, for a minimum of $50,000 by the end of 2016.