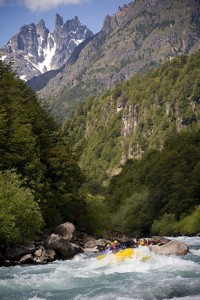 For every new fan O.A.R.S. receives on Facebook (http://ow.ly/jbZSa) before the end of the month, O.A.R.S. will donate $1 per fan, up to $2,500, to Futaleufú Riverkeeper to aid their efforts to fight three proposed dams along the Futaleufú River in Chilean Patagonia.

For more details on the threats to the Futaleufú, please see the O.A.R.S. blog, http://ow.ly/jaMuu.

“Known affectionately as ‘the Fu,’ this is one of the wildest, most pristine whitewater rivers in the world,” said George Wendt, president and founder of O.A.R.S. “We’ve witnessed the loss of too many wild rivers around the world, including in Patagonia—the Bio Bio being the highest profile river battle lost in the 1980s—and it would truly be a tragedy to lose the Fu. Thanks in advance for helping us, help the Fu.” Wendt ran the Futaleufú for the first time with his two sons in 2002.

O.A.R.S. has been offering ten-day whitewater rafting expeditions on Chile’s Futaleufú River for 12 years. The Class IV-V river begins in Argentina’s Andes, alternating between vistas of granite cliffs, lush foliage, snow-capped peaks and towering spires, offering one of the most famous and exciting river trips in the world.

In 1978, Wendt was part of a team that completed the first successful descent of Chile’s Bio Bio River and the river quickly earned a reputation as one of world’s best whitewater rafting venues. To traverse it, a trip took seven days through some of Chile’s most remote wilderness areas. Endesa, the Chilean state-run power company at that time, constructed the Pangue Hydroelectric Plant at the confluence of the Pangue and Huiri-Huiri rivers, despite strong protests by river enthusiasts and environmentalists. With the loss of whitewater rafting and a growing tourism economy, there was also the displacement of indigenous Pehuenche people, who had lived in the area for centuries. Local environmentalists have now engaged river conservation groups around the world to see that the same fate doesn’t face the Fu.