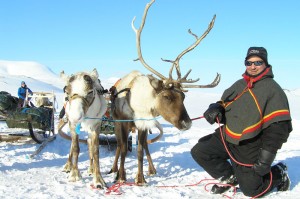 Nutti Sámi Siida has been awarded the Grand Travel Awards Ecotourism Prize for 2011. This year the Ecotourism Society of Sweden, together with the trade journal, Travel News, has awarded the prize to Sweden’s most successful Sámi operator – a company that has successfully combined genuine Sámi culture with commercial success in an international market.

Nils Torbjörn Nutti, together with Carina Pingi, has run the Sámi tourism company Nutti Sámi Siida in Jukkasjärvi outside Kiruna since 1997. Since the start, the company has worked closely with the Ice Hotel, and the Sámi experiences are among the most popular and most publicised activities offered to visitors.

Nutti Sámi Siida’s range includes day-long activities arranged together with the Ice Hotel, and its own unique reindeer sledding expeditions lasting from two days up to a week. During summer and autumn, walking tours are also arranged. Two years ago, the company opened its own accommodation facility, Reindeer Lodge, which lies just outside the village of Jukkasjärvi. Up to 16 guests are offered unique, high-quality accommodation with Sámi design, dining experiences and guided tours, with the building surrounded by reindeer.

“It’s fantastic to be rewarded with one of Sweden’s finest tourism prizes,” says Nils Torbjörn Nutti “The prize supports our basic concept to preserve and develop the Sámi culture via responsible tourism. We have become an important representative of and ambassador for the Sámi culture. This has inspired others to start new Sámi tourism companies, but has also brought a positive response from Sámi society.”

Nutti Sámi Siida has welcomed several thousand international guests from all corners of the world, including the Swedish royal family who, together with the king and queen of Jordan, visited the company a couple of years ago.

The prestigious Grand Travel Awards ecotourism prize is awarded to the operator that has best represented and developed Swedish ecotourism in the past year. The nominated candidates are selected from those holding the quality mark, Nature’s Best – a selection of the best outdoor tour operators in Sweden.

Nutti Sámi Siida wins the award for its long-term and patient work in uniting the Sámi culture with the global traveller’s quest for genuine and modern experiences. The concept has not just been a successful ambassador for Sweden’s Sámi population, but has also created attraction value and promoted one of our biggest tourism icons, the Ice Hotel.

Congratulations to Nils Torbjörn and Carina and all their staff!