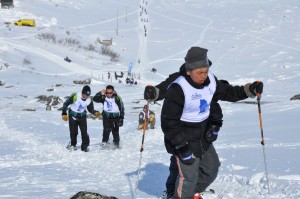 First of all where is Nunavik?

Timeless Beauty
Nunavik is Quebec’s arctic region. An immense, pristine territory lying north of the 55th parallel and bordered by Hudson Bay to the west, Hudson Strait and Ungava Bay to the north and Labrador to the east. Imagine 507,000 square kilometres of truly wild tundra, taiga forest, scenic mountains, majestic rivers and countless lakes! This unspoiled region is home to a rich array of plants, fish and other wildlife, each species uniquely adapted to the North. Be prepared for a genuine outdoor adventure!

A Noble People
While the vastness of this immense region can easily prove unsettling for visitors, the cheerful and friendly manner of the region’s inhabitants, the Inuit, will quickly put you at ease. Nunavik Inuit will welcome you warmly to their corner of the world, introducing you to the distinctive characteristics of their cultural and linguistic heritage, art and history, as well as traditional clothing and tools. 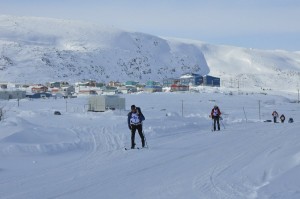 Kangiqsualujjuaq is the easternmost village of Nunavik, located about 160 km to the north-east of Kuujjuaq. It is situated 25 km from Ungava Bay on the George River, nestled at the end of a cove called Akilasakalluq. Tidal movements reach as far upstream as the village so that, at low tide, water recedes almost entirely from the cove. Kangiqsualujjuamiut’s summer life is therefore closely linked to the rhythm of the tides. The village itself stands in the shadow of an imposing granite rock outcropping which rises to the north of the bay. Despite its northerly location, the valley sheltering the village is beautified by luxuriant vegetation. In the 1960s, the village even operated a small spruce lumber mill. For hunters, anglers and adventure lovers alike, the surroundings of Kangiqsualujjuaq are full of natural attractions. The calving grounds of the George River herd, the largest ungulate population in the world estimated at several hundreds of thousands of head, is nearby. The George River, as well as other rivers in the area, teem with fish, particularly Arctic char, Atlantic salmon and a variety of trout. At the site of the beautiful Helen’s Falls.

About 100 km to the east of Kangiqsualujjuaq are the Torngat Mountains. This range stretches for 300 km along the Quebec-Labrador border, between Ungava Bay and the Labrador Sea. Its eternal snow, glacial troughs, cirques, fjords and the majestic Mount D’Iberville which dominates the range at 1646 m make it an exceptional destination. The Koroc River, which flows from the Torngat Mountains all the way to Ungava Bay, as well as the Abloviak Fjord conceal countless natural beauties and are entrancing settings for hikers, canoeists and kayakers to explore.

Now that you know a lttle bit more about Nunavik (But please take notes that the only way to fully appreciate this fabulous region is to visit and explore Nunavik with the best guides: The inuit ! 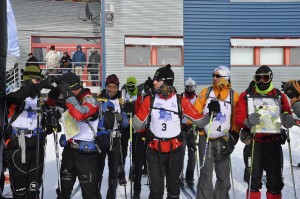 Let’s talk about the race :

A well-earned victory for the Spin Sport Plein Air team at the International Nunavik Adventure Challenge!

After three days of intense effort, the Quebec team Spin Sport Plein Air made up of Ian Beaulieu and Simon Côté won the very first International Nunavik Adventure Challenge. They completed the course in 13h34min39sec. The Quebecers finished ahead of the Americans (Out There) including Make Kloser quadruple world champion racing for the first time on an international with is son Christian Kloser 18 years old. and the French team (Endurance Mag).

For this third and ultimate stage of the race, participants could choose between skis or snowshoes. They had to cross a valley via a spectacular 200-metre zip-line and use their map to find their way across 55 kilometres of fabulous territory surrounding the Kangiqsualujjuaq village.

After spending a night in an Inuit camp that was all set up for them before the race (as a fun and well appreciated surprise) on the second night of the race, the teams returned to racing as of 8:30 a.m. under sunny skies and in -25°C weather. We must mention a kind gesture on behalf of the Spin Sport Plein Air team who showed exceptional sportsmanship at this stage by deliberately choosing to offer their faster skis to the Americans in order to guarantee a fair race. The Americans, who have yet to receive their luggage and equipment, were forced to race using equipment loaned to them by other teams such as Spin Sport Plein Air. “We knew that we had a chance to win the race and we did not want this victory to be based on equipment alone. Since the Out There team was leading the race with us, we decided to lend them our skis. It was a risky decision, but we are very proud that we did it,” said the captain of the team, Ian Beaulieu of Baie-Comeau.

At the end of the 3rd day of racing, Mont Torngate, Kangiqsualujjuaq’s local team, completed their first international adventure race in 17:38:48, in 7th place. Their great performance made everyone in the community really proud. They proved that they have the endurance and tenacity of their ancestors and Nunavik elders.

When Jobie Unatweenuk arrived back in Kangiqsualujjuaq March 27 after completing their first international adventure race, he said the feeling was “pretty good.” As he and his teammate David Unatweenuk started passing houses as they made their way to the finish line, people came out of their homes to cheer the pair on. Team Nunavik, the only local competitors, completed the race March 27 in seventh position, crossing the finish line to a line of more than 200 local residents cheering the duo on. That is more than 25% of the community ! “It was pretty good to see all the people waiting for us there,” Unatweenuk said. “The community has been really great, they’re very proud.” 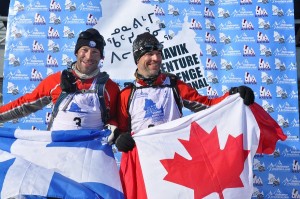 Unatweenuk, who works for the local Torngat Mountains National Park, is no stranger to trekking, even snowboarding, and has participated in all of the previous Nunavik Adventure Challenge workshops and events held in Kangiqsualujjuaq. But this is was Nunavik Adventure Challenge’s first international event, pitting Unatweenuk against experienced racers from around the world. I really wanted to get into the international adventure,” Unatweenuk said. “Some of the courses were pretty tough, like the cross-country skiing and going down the zipline, but it was pretty fun.”Unatweenuk, at home in familiar surroundings, said the event also gave his community and region great exposure as an adventure tourism destination.

This first Nunavik International Challenge event hosted athletes from as far away as South Africa, Italy and France to compete in a multi-sport winter adventure race around the community of Kangiqsualujjuaq and its adjacent Kuururjuaq provincial park.

Team South Africa showed fantastic spirit throughout the race and amazed everyone by their endurance. Just imagine, 5 days ago they had never seen snow or ice before! “The team walked off the plane, took off their mittens and picked up a handful of snow for the first time,” he said. “It was fantastic, this was a childhood dream for them.”

For this first international race 4 women  were up to this big Challenge, 3 of them are mothers and are still adventure racers and athletes . Stephania Zartorri of Italia, Leanne Muller of Canada and Maggie Obed of Kangiqsualujjuaq Nunavik proved that you can be a great mother and a great adventurer. Salomon Bobkittens, of Nicky Cameron and Leanne Muller completed this international race in 5th place overall !.

One of the most surprising and inspiring aspect about of this first Nunavik international challenge was the fact that 42 teams of young inuit raced with the international teams during the first day of the event. To complete the race the had to go over four check points on skis, snowshoes, trekking, trail run on snow and cross a small river on a zip line. Those 84 young inuit adventure racers surprised all the international teams and medias by their talent and motivation. No international teams expected to see so many adventure small adventure athletes racing with them in a community of 750 peoples in the Great North of Canada. For the youths of Kangiqsualujjuaq it was their fourth community adventure race in 3 years. The sport of AR is a training platform for adventure tourism coaching and youth outdoor school. This program www.nunavikadventurechallenge.com proved to be really popular for the last 3 years with the young population of Nunavik  that 65 per cent of the community is under 25 years old. 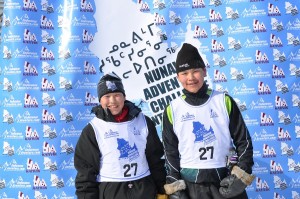 Race organizers are very satisfied with the sequence of events. “The people of Kangiqsualujjuaq were fantastic. The efficiency of their technical support, a warm welcome, and all the factors which make for a great competition were present. Furthermore, the weather was on our side with three consecutive days of sunshine. We could not have asked for more,” said Jean-Thomas Boily, co-president of Endurance Aventure, the organization in charge of the event.

To complete this dream week, the event and the region had the privilege to receive great international and national media coverage’s. For the first time in North America, national television and radio stations follow an adventure raid on a daily basis. The CBC/Radio-Canada TV national crew was on land with the organisation and the racers. During their full week of adventure they produced more than 20 stories for national TV news, national sports TV news, morning and drive at home radio prime time shows. Those adventurous media specialists did a fabulous promotion for the region, the inuit nation, the event and the teams. After the event they said that they had an amazing adventure and that is was more exciting and challenging than covering Olympics games.

During next month the event will also benefit from media coverage in Europe through the following television stations: Eurosport, TV8 Mont Blanc, Montagne +, Sport +, and SKY TV.  All the media coverage’s will be on this page : http://www.nunavikinternationalchallenge.com/index.php/en/mediamenuen

For everyone around the Globe that was wondering if the racers would ever encounter some polar bears on the race course. To answer to this question that we had several times, a big part of the organising team was inuit and worked really well to plan a safe race course that was not on the ice of the Ungava Bay were polar bears live and hunt.

But we felt that the adventure would not be totally complete without seen a polar bear, so our camera crew had the privilege of being guided on the helicopter on Ungava Bay, about 40 km out of town by the Kangisualujjuaq’s elder Willie Etok. We were hoping to successfully film a polar bear. Our wishes came true and we therefore have fabulous TV images of a polar bear walking on the same ice as the South African team. However, it surely wasn’t the polar bear’s first experience on ice!

The International Nunavik Adventure Challenge is the result of a precious collaboration between Endurance Aventure, the Kativik Regional Government, Nunavik Parks, the village of Kangiqsualujjuaq, Rossignol, the FCNQ, and the Nunavik Tourism Association.