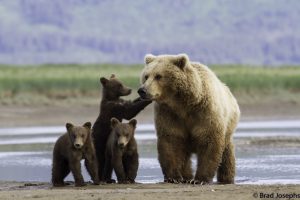 Southwest Alaska is now ground zero in a conservation crisis. A massive open-pit gold and copper mine is slated for development inside the headwaters of the Bristol Bay watershed, home to two national parks, a national wildlife refuge, a state park and countless acres of sensitive and pristine roadless terrain. As a global leader in conservation tourism, Natural Habitat Adventures is taking a stand against this dramatic insult upon the environment, wildlife and Alaskan communities. Together with Alaska’s fishing industry, Native communities and more than 200,000 World Wildlife Fund supporters, Natural Habitat Adventures encourages opposition to the Pebble Mine’s environmental impacts and the destruction of Alaska’s pristine habitats, inviting signatures to WWF’s petition here.

A fight against the proposed Pebble Mine has raged for nearly two decades, following the discovery of the rich mineral deposit near Katmai National Park. Prospects looked positive for protecting this sensitive environment in 2014 when the Environmental Protection Agency (EPA) under the Obama Administration deemed this heavy metal mining project too risky to consider further.

But the EPA under the current administration has reversed course, reopening the permitting process and charging the Army Corps of Engineers with preparing an Environmental Impact Statement that will aid regulators reviewing the permit application. The outlook for Bristol Bay and Katmai National Park, where Natural Habitat Adventures leads trips to view coastal brown bears, has become precarious. As the Trump Administration pushes the Pebble Mine agenda forward, the possibility grows for approval of a massive mining operation that would mar a vast tract of untouched wilderness and two of Bristol Bay’s prime river systems.

The proposed industrial site would be nearly as deep as the Grand Canyon and consume more land than the area of Manhattan. It lies within an active earthquake zone. And it would harm one of the most productive marine ecosystems on the planet—including the world’s largest wild salmon fishery, which produces 46 percent of the world’s wild sockeye salmon harvest alone and provides income for 31 Alaska Native villages and more than 12,000 jobs for fisherman and processors—a $5.4 billion annual industry. 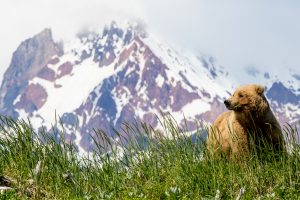 In addition to the footprint of the mine itself, multiple landscape-altering transportation systems would traverse pristine wilderness that provides critical habitat for wildlife, including thousands of bears and millions of wild salmon, and sustains ecosystem health for Alaska Natives who have relied on natural resources in this region for centuries. Other wildlife that depends on this unique environment include bald eagles and 189 other bird species, seals, walrus, pacific right whales, beluga whales, rainbow trout, and more than 40 other species of terrestrial mammals such as moose, wolves and others.

The Pebble project will cause irreparable harm to this vulnerable ecosystem. In addition to tailings and toxic water pollution on site, the injuries include an 80-mile-long road crossing more than 200 streams and penetrating the most productive brown bear habitat on Earth, a year-round icebreaking ferry running across Lake Iliamna, and a large industrial airstrip and port that includes a 4.2-mile dredged corridor through some of ¬¬the world’s most unmarred and productive marine ecosystems. A new road would pass within a mile of the McNeil River State Game Refuge and Sanctuary, currently the undisturbed home of one of Alaska’s densest concentrations of large mammals, including the largest congregation of brown bears anywhere on the planet.

Time is running out to help protect the brown bears, salmon and other abundant wildlife of Southwest Alaska. The public comment period for the Pebble Project Environmental Impact Statement ends after June 29, 2018, making it critical to voice concern about the Pebble Mine before the end of the month.

Join Natural Habitat Adventures and WWF’s joint opposition to the Pebble Mine by sharing your specific concerns about the project with the Army Corps today. Precise, detailed comments hold the most weight.