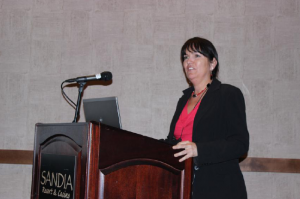 The Summit, “Collaborate, Innovate, Educate – Engaging Ideas for Native Business Success,” was held at Sandia Resort & Casino in Albuquerque and presented by the American Indian Chamber of Commerce of New Mexico and the State of New Mexico Indian Affairs Department.

Ferguson gave an attention-grabbing presentation where she expounded on ways Indian Country can increase its economic development through cultural tourism planning.

“There are so many opportunities for economic development through cultural tourism,” said Ferguson. “Our goal at AIANTA is to inspire tribes across the six regions of Indian Country to really focus on their indigenous traditions and incorporate them into a sustainable tourism program.”

No one can tell the stories of Native America like American Indians can, which is why it’s critical for AIANTA to educate tribes on the economic development benefits of telling their stories through tourism platforms, Ferguson said.

At the Summit, Ferguson and AIANTA staff educated attendees on strides the national nonprofit has made across the country this year, including the upcoming launch of the book, American Indians and the Civil War, an important tool for cultural heritage tourism. AIANTA partnered with the National Park Service, Bureau of Indian Affairs, Bureau of Indian Education and Eastern National in light of the 150th anniversary commemoration of America’s Civil War.