hauling pulkas (sledges) with personal and shared equipment (food, stoves, fuel) across mountainous terrain from the South to North coast. The skiers will cover a total distance of 40 – 50 km retracing sections of the historic Shackleton route from 1916. The expedition will be guided by leading polar explorer , expedition leader, author and speaker Børge Ousland , who initiated expeditions to both the South and North Poles and solo crossings of both the Antarctic and the Arctic from coasts to coasts. Last year Børge and skipper Thorleif Thorleifsson

in the “Northern Passage”, a 31 foot sailing trimaran made of fibreglass with a ten horse power outboard as only engine, became the first ever to circumnavigate the North Pole in one season. While planning new outings to remote places, Børge Ousland makes his living giving lectures, writing books (9 so far) and contributing to films from the wilderness. He is one of the few speakers represented by National Geographic Speakers Bureau; a part of the National Geographic Society, Washington, D.C. 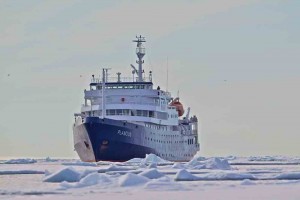 In general, participants must be physically conditioned and experienced in order to participate in strenuous exercise in alpine environments with sometime extreme weather. In addition, ski trekkers must be familiar with skiing and crevasse rescue techniques that can be learned in Alpine Introductory Courses. The ski team will aim for reunion with the ship at Stromness Bay to rejoin the rest of the ship’s passengers and enjoy the latter part of the South Georgia cruise itinerary.

The voyage is an exciting “once in a lifetime” expedition not only for the tough adventurer. The voyage is also available for non skiers who want to book „cruise only“ (with landings, hikes and zodiac excursions). The sea explorers (cruise only) will explore the Northern shorelines of the Island, while at the same time the ski explorers will attempt to traverse the Island.