AAC’s new 11-day safari, Mozambique Eco-Adventure, follows in many of the same footsteps as the film in celebrating the diverse wildlife and mythical landscapes of Mozambique. It includes Gorongosa National Park and the country’s remote and unspoiled coastline and deserted beaches.

This is one of several carefully crafted, low-impact “green” safaris utilizing small-footprint camps and lodges that have innovative eco-friendly programs and social projects that AAC will launch in 2010, noted owner Kent Redding.

The National Geographic film produced by James Byrne is all about Gorongosa National Park, a fragile and very special national treasure of Mozambique that after years of ruinous civil wars is now being restored to its former glory. The film debuted at the Berlin Tourism Film Festival where it was honored as the Best Film in all Categories. The Berlin Tourism Film Festival is considered by many as the most important tourism film festival and its awards are the equivalent of the Hollywood Oscars for this kind of film.

“As a responsible travel company Africa Adventure Consultants wanted to introduce travelers to the wonders of Mozambique but in a sustainable way by incorporating innovative eco-lodges and tent camps that have minimal impact to the environment and benefit the surrounding communities,” said Redding.

The all-inclusive ground rate for the Mozambique Eco-Adventure is from $5,012 per person, double occupancy (Low Season) and includes internal transporta 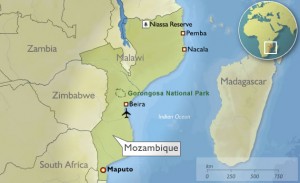 tion, accommodations in tented eco-camps and deluxe eco-beach lodges, all meals, guide services and park fees. In addition, ACC will offset 100% of all carbon emissions through the purchase of carbon credits.

Park explorations are on foot, by boat and on game drives with the region’s top guides. Guests are introduced to the Carr Foundation who has teamed with the Government of Mozambique to protect and restore the ecosystem of Gorongosa National Park and to develop an ecotourism industry to benefit local communities. The rehabilitation of Gorongosa represents one of the greatest conservation projects active in the world today.

The first of two beach experiences is at Varanda, a privately owned nature reserve with dunes, beaches and mangroves. Varanda lies at the tip of a peninsula and is only a short distance from Ilha de Moçambique (Mozambique Island), the former 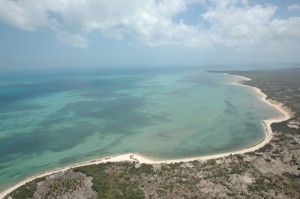 capital of Mozambique and a UNESCO World Heritage site. The second is at the Guludo Beach Lodge located on one of the top rated ‘deserted beaches’ on Earth. The Lodge was created as an innovative and sustainable model to relieve poverty and to protect the environment. The Lodge’s foundation, Nema, is funded by the Lodge’s donation of 5% of all profits and currently works with 12 local communities funding and administering various projects including hunger relief, clean water, mosquito net distribution and funding local schools.