With the number of visitors to Nepal reaching a record-breaking 1 million in 2018, experts KE Adventure Travel are seeing a huge trend in travelers looking to find alternative ways to experience the Himalayas in 2019. Beyond the popular routes to Everest and Annapurna Basecamps, trekkers are seeking adventures where they’re unlikely to find many other tourists – or WiFi – on route. 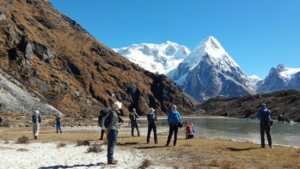 1) Adventures in remote, little-visited regions
Already in 2019 KE’s unique new Lamjung Himal Trek is fast approaching the popularity of the Annapurna Sanctuary Lodge Trek. An incredible ridge-top trekking holiday, travelers can expect pristine camping places and sweeping mountain panoramas in a rarely seen corner of the Annapurna Himal. Even further afield, tougher treks such as to Kangchenjunga Basecamps are coming in strong, with travelers willing to take on the challenges of trekking in a remote region for the reward of being in places untouched by tourism.

2) Full-service camping is on the up
As of the end of January, KE has seen that adventures which require full-service camping are already 10% up on bookings for 2019. These adventures, such as the Ganesh Himal Trek, take travelers into regions where the infrastructure for tourism hasn’t fully developed and lodges aren’t readily available, so camping with all meals included is the only way forward.

3) Travelers return to areas rebuilt after the 2015 earthquake
Looking to support areas affected by the 2015 earthquake, travelers are returning to Langtang, a village destroyed in a landslide and rebuilt last year. A remote region and less busy than Everest and Annapurna, in 2019 KE have seen places on its brand new and unique Gosainkund and Langtang Trek increasingly sought after – it’s currently the third most popular trek after best-selling Everest Basecamp itineraries.

4) Interest in reconnaissance trips is on the rise
Known for pioneering itineraries, in 2018 KE’s Tosha Lake Reconnaissance trek was extremely popular – travelers are looking to be part of exploratory expeditions. With the success of itineraries which KE has run in the past such as Mukot Peak, which sold out overnight, and Saribung Peak, which has continued to run, KE is planning some thrilling new ideas for reconnaissance trekking and trekking peak holidays for 2020 which will be announced soon.

KE has been running adventure holidays in Nepal since 1988 with an initial focus on climbing trekking peaks. The very first trip in that year did get to Everest Basecamp – but the main objective was the nearby 6000-metre peak, Lobuche East. Over the succeeding three decades, this pioneering company has picked up, reconnoitered, developed and refined a great number of trekking and trekking peak itineraries. This continual product development means that KE has explored the length and breadth of Nepal, from the Tibetan border in the far north-west to Kangchenjunga in the remote north-east, and developed one of the most extensive and specialist ranges of Nepal product worldwide.

As KE Nepal Product Manager Kit says, “We offer the iconic Everest and Annapurna area itineraries, which are justifiably popular and will always be best-sellers, but we also recognize that a growing number of our clients are looking for a more solitary ‘real Nepal’ experience beyond the tea-shops and Wi-Fi of Namche Bazaar or Ghorepani.”

Over 50% of KE staff have worked, trekked or visited Nepal, and are deeply passionate and committed to supporting this beautiful country. Over the years KE has raised £240,000 to support its partner charity, The Juniper Trust, which works to help build communities in Nepal, and over the next two years will be working with them on a unique new project: building 20 schools for 2020.