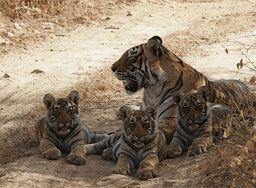 According to a recent article published in The Telegraph, the Supreme Court of India is considering banning tiger tourism and safaris in “core” tiger habitats, out of the concern that such trips are adversely affecting the approximately 1,400 wild tigers left in the country. They are being urged by a group of travelers, tour operators and local travel industry stakeholders to reject the ban.

“This is a critical ruling for the future of tiger tourism in India,” said Julian Matthews, chairman of TOFT [Tour Operators for Tigers]. “Banning tourism from the core areas of tiger reserves is an irresponsible and unnecessary move that will have many negative consequences. “Tourism in tiger reserves provides an income to thousands of people, many of them local to the area of the reserves. Closing tourism in these core areas will cause the number of people visiting these reserves to drop drastically.”

TOFT and critics of the ban claim that it would not just affect people negatively but would actually hinder tiger conservation:

“There is evidence to show that well-managed tourism can have a positive impact on tiger populations. It can help foster a love of wildlife in common people; and there are hundreds of examples around the world where tourism has been fundamental to successful conservation efforts.” He said that guides and tourists often provided “extra eyes and ears” in the forest, which deterred poachers and strengthened the accountability of the Indian Forest Department, which manages the national forests.

For background on the issue, please read the entire article by Oliver Smith.