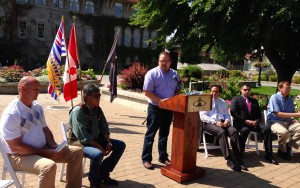 Parliamentary Strahl made the announcement for $1.8 million to AtBC at the St Eugene Resort in Cranbrook, British Columbia. Over the next three years, this funding will be used to support market-ready tourism businesses and to expand the association’s Authentic Aboriginal certification program. Funding support is provided through the Government of Canada’s Strategic Partnerships Initiative (SPI). It is intended to increase Aboriginal participation in complex economic opportunities by coordinating the efforts and investments of multiple federal partners.

Aboriginal Affairs and Northern Development Canada has made significant investments through the Aboriginal Tourism Association of British Columbia to help develop market-ready Aboriginal tourism products throughout the province.

To date, Aboriginal Tourism of British Columbia has been instrumental in generating $50 million in revenues in Aboriginal cultural tourism.

The AtBC Authentic Aboriginal certification program is a voluntary process offered to Aboriginal tourism businesses, performers and artisans to ensure the cultural authenticity and quality of their operations.

AtBC’s vision is to have 100 Aboriginal tourism businesses established by 2017, employing some 4,000 full-time employees.

“Our Government is pleased to invest in this province’s fast growing Aboriginal Tourism industry. The project aims to have 100 Aboriginal tourism businesses established by 2017, employing some 4,000 full-time employees. This investment is a clear demonstration of our Government’s commitment to increasing economic development opportunities for Aboriginal people.”
– Mark Strahl,
Parliamentary Secretary to the Minister of Aboriginal Affairs and Northern Development and Member of Parliament (Chilliwack–Fraser Canyon)

“I am proud to be part of a Government that continues to support projects that will have concrete benefits for my region. This investment will boost Aboriginal tourism and create jobs in British Columbia.”
– David Wilks,
Member of Parliament for Kootenay-Columbia

The Aboriginal Tourism Association of BC and the Province of B.C. have a strong partnership and since 2006 we’ve seen employment in this sector increase by 66 per cent – 2,900 jobs. Today’s federal investment will help keep that growth going and have a positive effect on communities – Aboriginal and non-Aboriginal alike.
– Shirley Bond,
Minister of Jobs, Tourism and Skills Training & Responsible for Labour, British Columbia

“As a Nation with our own world class tourist destination, we are pleased the Federal Government is making a strategic investment in Aboriginal tourism in British Columbia. This funding will allow Aboriginal entrepreneurs to develop businesses that showcase the cultural uniqueness of all Aboriginal people in British Columbia.”
– Bob Luke,
Chair,
Economic Sector, Ktunaxa Nation

“Canada’s investment allows our staff and expert consultants to work with individual businesses on a one-on-one basis. AtBC can help assess if a business is market-ready and help Aboriginal entrepreneurs develop the tools and strategies to succeed.”
– Keith Henry,
Chief Executive Officer,
Aboriginal Tourism Association of British Columbia