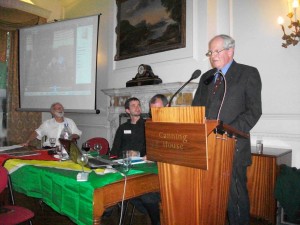 Edward Glover, Chairman of the Iwokrama Board of Trustees, provides an update on the Iwokrama International Centre.

The crowd’s first taste of Guyana came in the form of the country’s famous rum punch and samples from El Dorado’s award-winning line of rum. After being sufficiently sated with the physical tastes of Guyana, the attendees were seated and welcomed by the Honorable Laleshwar K.N. Singh, Guyanese High Commissioner to the U.K., who started the evening’s presentations with a brief overview of the positive recognition Guyana is receiving from international press and tour operators.

The evening’s chair, Tony Thorne, Managing Director of Wilderness Explorers, then provided an update on general tourism developments in Guyana, including recent improvements at the Iwokrama Canopy Walkway and Atta Rainforest Lodge.

Indranauth Haralsingh, Director of the Guyana Tourism Authority (GTA), gave an excellent overview of Guyana’s tourism industry. Edward Glover, Chairman of the Iwokrama Board of Trustees, spoke about new research and tourism initiatives at the Iwokrama International Centre.

Stephanie Holt, who captured the audience’s attention with her coveted job title of UK Brand Ambassador for El Dorado Rum, provided a photo tour of the process behind the distilling of some of the world’s finest rums, and then invited everyone to come to Guyana to experience it firsthand.

Kirk Smock accompanied a photo slideshow with behind-the-pages stories of researching and writing his Guyana guidebook, published by Bradt Travel Guides. During his talk, Smock announced that Bradt has commissioned an updated second edition of the guidebook due out in 2011.

Colonel John Blashford-Snell, one of the world’s most renowned and respected explorers spoke about his expeditions to visit the remote Wai Wai Amerindians in southern Guyana, including the time he brought them a grand piano from the UK. Blashford-Snell is returning to Guyana in October to lead a sold-out expedition to Wai Wai territory to help the community members locate and survey a 40-mile access trail.

Chris Parrot, company director and founding member of the UK tour operator, Journey Latin America (JLA), rounded out the evening with tales from his first trip to Guyana, which was more than 30 years ago, and his most recent, which was just last year. After his trip to Guyana in 2009 with Wilderness Explorers, Parrot decided to include Guyana in two upcoming trips he is leading to celebrate JLA’s 30th Anniversary. The two trips, billed as Trail-Blazing Through the Guyanas, take place in September and October and are completely sold out.

Claire Antell, the UK representative for Wilderness Explorers and main organizer of the event, was very pleased with the turnout of media and trade.

Some of the high-profile media reps that attended the event included journalist and author Sally Emerson, who is traveling to Guyana at the end of September on a commission for the Sunday Times, one of the most widely read and circulated Sunday newspapers in the UK. Ruth Anne Lynch, who recently updated the Guianas section of the Rough Guide to South America was also there, as were Bradt Travel Guides Managing Director, Donald Greig and Publishing Director, Adrian Phillips, and Lyn Hughes, Publisher of Wanderlust magazine.

Another media company in attendance was Big Earth Productions, whose team of representatives came to gather information for a trip to Guyana. Producer, director and host, Russ Malkin and one member of his production just visited Guyana in September to film a segment for a television show that will coincide with a book Malkin is researching and writing titled, “101 Amazing Adventures of the World.” Big Earth’s Louisa Edwards said, “The event was wonderful and you had fantastic speakers. I love Guyana all the more now. It really does sound like a lost paradise.”