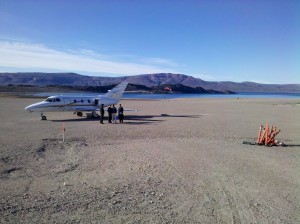 The plane at Grise Fiord.

Global Rescue has medically evacuated a 65-year-old adventurer who had just completed a 100-day, 1,485-mile journey through the Arctic Circle on foot and kayak.

Jon Turk, whom Outside magazine has called “one of today’s boldest, most inquisitive, and most articulate adventurers,” had successfully circumnavigated Ellesmere Island in the far northern reaches of Canada, when he began to experience severe abdominal pain. He was able to reach a tiny clinic in Grise Fiord, the northernmost continually occupied settlement in North America, where he contacted Global Rescue.

The attending nurse at the clinic diagnosed symptoms consistent with kidney failure and forwarded his medical information to Global Rescue. The company’s doctors and Johns Hopkins physicians agreed that he required immediate medical evacuation to the nearest dialysis facility, which was several thousand miles from his location. Time was of the essence, since his condition was deteriorating rapidly.

Despite poor weather conditions along the flight path, Global Rescue was able to deploy a medically staffed aircraft to evacuate him to Ottawa from the small Arctic outpost. He was stabilized and prepared for emergent dialyzing, and his condition improved after advanced intervention. He was then transported by Global Rescue to his home in Montana.

“Global Rescue dispatched aircraft, under inclement conditions when others would not fly, and brought me south to medical attention,” Turk wrote in an email. “They saved my life.”

“Beyond the mechanics [of the operation], the entire Global Rescue staff treated me in a friendly, competent, and human way,” Turk continued, “almost as family, an attitude that is so hard to find in this modern world of droid computer interfaces.  I recommend their services to anyone who strays far from home.”