In the adventure travel industry, extreme adventure isn’t new. In fact, you might be hard-pressed to find something that hasn’t, at some point, been done in outrageous style. Still, British climber and explorer Leo Houlding may have managed it.

At a breakfast meeting hosted by the Adventure Travel Conservation Fund (ATCF) on Wednesday, 18 September, delegates were treated to short films documenting Houlding’s latest exploits: kite-skiing with fully loaded pulks (small sleds) across 2,000 kilometers (1,242 miles) of Antarctic glaciers to climb the Spectre, the planet’s most remote peak, and then base-jumping off it; and traveling to Papua New Guinea to scale the planet’s largest trees — huge strangler figs in the primary rainforest that grow to nearly 45 meters (150 feet). 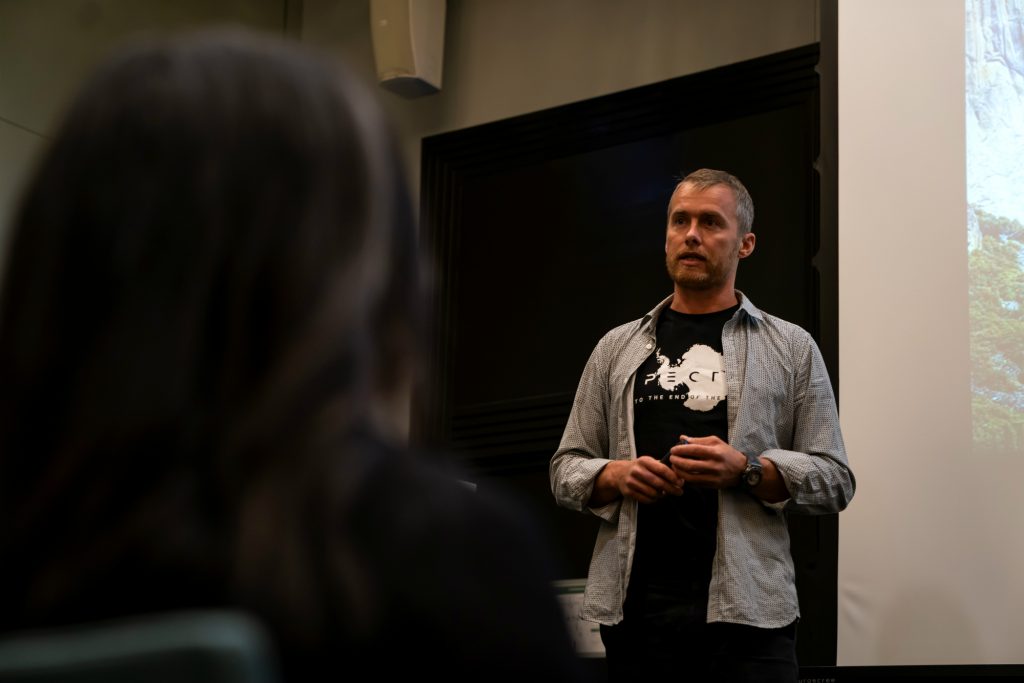 Speaking to a packed room, Houlding described his connection to causes like the ATCF’s. “It starts with appreciation of these incredible places and a deep desire to want to protect them,” he said.

His résumé of exploring remote, fragile places is long, and his reaction to the human-caused destruction he’s seen is clearly visceral, but he remains realistic. Showing a photograph of palm oil fields just feet away from the rainforest they displaced, Houlding said, “The main industry in this region of Papua New Guinea, and the main source of deforestation, is palm oil plantations. Yet millions of people depend on these plantations for jobs. So we must be pragmatic in our arguments: We can’t change what’s already in place, but what absolutely must not happen is for it to go any further into the jungle.”

Board chairman Steve Barker and executive director Soraya Shattuck described how the ATCF has aggressively tackled conservation efforts around the world. In just three years, it’s given away 100% of all donor dollars — $235,000 USD in total — to fund initiatives in eight countries. When a presentation like Houlding’s shows in stark detail the global effect of development and climate change even in the world’s most far-flung places, the ATCF’s mission takes on new dimensions.

Echoing the theme of much of this year’s Adventure Travel World Summit, The Way Forward, the ATCF gathering, with Houlding’s travels as the centerpiece, left no doubt that the need for action is pressingly urgent.

Learn more about the ATCF and the projects it supports.