Elephants are the stars in a new-for-2018 multi-sport Thailand adventure for women-only hosted by Wild Women Expeditions. 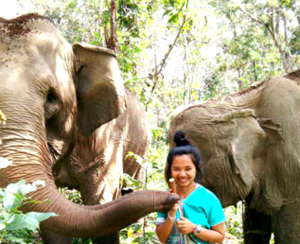 Fall 2018 departures of Elephants, Treks and Temples tour of Northern Thailand will immerse guests for 11 days in the culture and landscape of northern Thailand’s Chiang Mai region on bicycles, and while trekking and coursing down rivers on bamboo rafts.  Stops enroute include helping to bathe, feed and walk elephants at both and an elephant rescue center and in a Karen tribal village in the jungle.

“Ethical, sustainable tourism is the Asian elephant’s best hope to survive. In the spirit of the #BeKindToElephants movement, we want to respect and protect these majestic animals and so won’t be riding elephants on any Wild Women tours,” says Jennifer Haddow, Owner/Director of Wild Women Expeditions. “This practice often relies on wild elephants being brutally tamed before they can be ridden and we are creating tourism opportunities with elephants that do not cause harm.”

The focus on elephants is part of a Wild Women Expeditions’ commitment to change the perception of elephants as beasts of burden for tourists. The company is supporting Chai Lai Sisters, a community-based tourism project to convert an abusive elephant riding camp into a sanctuary or rescue center for elephants that is run by the Karen tribal community near Chiang Mai. This company also benefits a second organization, Friends of the Asian Elephant Foundation, supporting the work of the work of the first elephant hospital in Thailand to rehabilitate elephants injured by overwork and neglect in tourist camps. 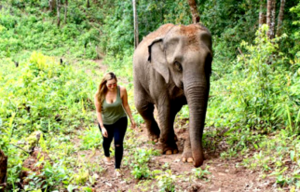 Wild Women Expeditions has also thrown its financial support behind Chai Lai Orchid and a Go Fund Me Campaign to empower local women and rescue elephants. Donations are needed to save 13 Asian elephants from abusive conditions and to support a human-trafficking prevention program. For more details and to contribute see: gofundme.com/ChaiLai.

Elephants in this region are big business. The animals are enslaved to the tourist trade 365 days a year as cheap transportation carrying the weight of a heavy metal chair plus the weight of humans. Elephants are also in chains to logging interests, day after day dragging felled trees from the jungle. In the rescue center caretakers from a Karen hill tribe assure that the animals are well treated and have access to water for bathing. See: chailaiorchid.com/elephant-sanctuary/.

In Chiang Mai is the world’s first elephant hospital that is supported by a non-profit organization called Friends of the Asian Elephant. Here treatments cover the spectrum of what distressed elephants may require, from illnesses requiring antibiotics to injuries mandating surgeries and future prosthesis, to maternal and infant care. See: friendsoftheasianelephant.org/en/. 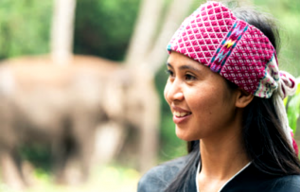 Thailand’s Chiang Mai is the gateway to access the country’s north. The Wild Women Adventure Tour will visit several tribal communities to get a view of the rural landscape through activities including cycling, rafting and trekking.

Rice paddies, orchards, bamboo and fern groves surround women on bicycles in Sri Lanna National Park. To cross a reservoir they board a longtail boat bound for lunch at a floating bamboo raft house. Atop Thailand’s second highest mountain they gaze across a landscape to neighboring Myanmar; they hike along a jungle trail and immerse themselves in the culture of a hill tribe whose business is maintaining tea plantations. The group will stay for two nights at Phu Chaisai, at an award-winning eco-resort crafted by bamboo in the jungle near Chiang Rai. One 3.5-hour trek leads to a Karen village hill tribe where elephants await new hands to feed and bathe them. Another day is spent at an elephant sanctuary near Chiang Mai.  Omnipresent throughout this journey are temples – or wats – and the role that rivers continue to play in shaping Thailand’s trade and agriculture.

A quarter century ago Wild Women Expeditions pioneered today’s steam-charged movement encouraging women to travel in small women-only groups. “Wild Women Expeditions gives women the opportunity to empower themselves amongst other women, connect with the natural world and make a positive impact in the communities we explore,” says Haddow.