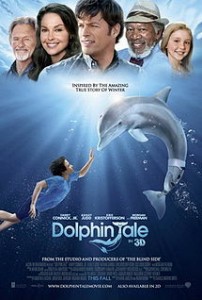 Dolphin Tale, a family-friendly Hollywood film about Winter, the tail-less dolphin, is being credited for causing a tourism boom for Pinellas County, Florida, according to an article in the Tampa Bay Times.

Comparing the film’s draw to the area to Lord of the Rings and New Zealand, the article reports that economic impact of the movie will total more than a half-billion dollars by 2013 and could triple by 2016, as tourists who come to see the dolphin are a boon to local hotels, restaurants and attractions.

David Yates, Clearwater Aquarium’s CEO, who says that visitors have quadrupled since the film’s release, credits the movie for closely tying the location to the film’s story and  creating a lengthy “afterlife” via DVDs and showings on multiple cable channels.

A local college studied the impact the film has had, and found that it generated jobs in 2010 during 55 days of production and has since become one of the most popular films in the U.S.

Other cases of “film-induced tourism” have been noted in the Harry Potter films, Braveheart, The Beach, and other movies where a destination has been clearly profiled and interest in regional travel has resulted.

For more on how movies, books, and celebrity endorsements are being used to promote travel and destinations: