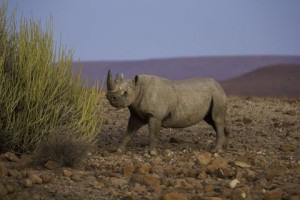 In an effort to raise funds and awareness about endangered rhinos, Wilderness Safaris and the Save the Rhino Trust (SRT) Namibia threw a fundraising event called Party For A Cause at the Tiger Reef Beach Bar in Swakopmund that was heavily attended by the Adventure Tribe who were in town for the tenth Adventure Travel World Summit. 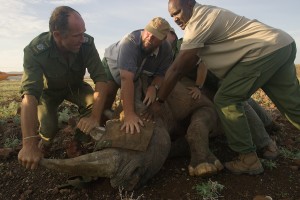 During the event, the crowd learned about the rhino and its habitat, and how we can help the survival of this beautiful animal. The desert-adapted black rhino (Diceros bicornis bicornis) survives in the Kunene Region (former Damaraland and Kaokoland) in the arid north-west of Namibia. They are the only rhino in the world surviving on communal land with no formal conservation status.

The mission of SRT Namibia is to serve as a leader in conservation efforts in the Kunene, including monitoring, training and conducting research focused on desert-adapted black rhino, in order to ensure security for these and other wildlife species, develop responsible tourism and create a sustainable future for local communities.

Living outside of a fenced-in protected area, the Kunene’s rhinos are considered to be the largest truly free-ranging black rhino population left in the world. These rhino are protected and monitored by staff from SRT, in conjunction with Namibia’s Ministry of Environment and Tourism (MET) and local communities. Four dedicated SRT patrolling and monitoring teams cover the core rhino range area of 25,000 square kilometers to deter poaching and to record detailed data on individual rhinos, such as age, sex, horn size and shape, ear notches and the animal’s overall health condition. 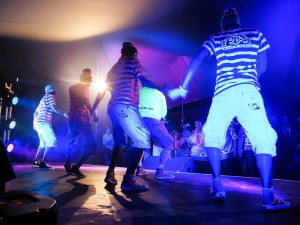 The Damaraland Choir kicked up the sand and got the party started with their uplifting performance, while SRT’s Marcia Fargnoli took out her flute and performed a spellbinding song dedicated to the rhinos.

Following the choir was Namibian rapper and Kwaito star EES, who got the crowd dancing to his upbeat raps and songs, accompanied by his crew of in-synch dancers. During his song “We Are One” EES enthralled the audience with lyrics that state “We are only as strong as our weakest member” and implored the crowd to put their hands up, “Because right makes right, and makes us better.”

Rounding out the Party for a Cause was DJ Peter Baron von Ginkel, who kept the late-night crowd rocking into the wee hours.

The following day, during the conference luncheon, the Adventure Travel Trade Association members raised additional funds by auctioning off donated items such as adventure gear and trips.

In total, the amount raised for the Save the Rhino Foundation Namibia was over 6,500.00 USD.

To learn more about the western black rhino and related conservation efforts, or to donate to the efforts, please go to Save The Rhino Trust.

2 Comments to Delegates Party for a Cause: Save the Rhino