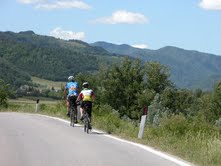 Fort Collins, CO. – While “Viva VERDI” may apply to his La Traviata in this season’s new Metropolitan Opera production, 150 years ago this was a political acronym signifying a desire for a unified Italy by Garibaldi and his followers known as redshirts, some of whom in 1860 traveled the length of Italy to move things along.

To honor everything Italy such as opera, pasta, wines, art, landscape and most of all people, ExperiencePlus! Bicycle Tours is hosting a nearly 1,400-mile, 28-day Italy 150 Expedition that pedals from Sicily to Rome, north along the Tyrrhenian coast to Tuscany and across the Apennine Mountains to conclude in Turin in the north where in 1861 a document-driven effort began unifying disparate entities that comprise today’s Italy.

Cyclists will experience enroute nine of Italy’s 20 regions in the north and south that culturally, politically and economically even today are worlds apart.  Milan and Turin are aligned more to industrial northwest Europe than to the impoverished Campania, Puglia and Calabria in the deep south.  Rome and the surrounding Latium, which divides and attempts to unite the two regions, remains a transition zone. Two 20th century writers with the same surname came from Turin: Carlo Levi who exposed the poverty of Italy’s south to the government, and Primo Levi who wrote about his Holocaust experiences when taken north out of Italy.

Maria Elena Price, ExperiencePlus! Bicycle Tours Co-Owner and Manager, said this legacy bike ride may be repeated by popular request.  This year’s dates are May 7 to June 4. The per person, double occupancy rate is $8,850 and includes use of a 24 – 27 speed high-tech bicycle; 28 nights in comfortable 3 and 4 star hotels and country estates; 28 breakfasts, 17 dinners, some lunches; van support; bilingual tour leaders; and cultural activities. Cyclists will average 60 miles a day, with three rest days factored in.