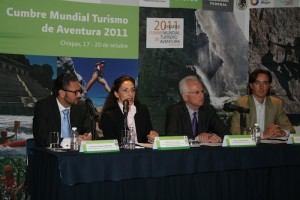 More than 650 tourism industry professionals, from 54 countries, will be gathering in San Cristóbal de las Casas, Chiapas for the 2011 Adventure Travel World Summit.

In a press conference with the Federal and Chiapas State Government, Mexico announced that everything is ready for the country to host its biggest international tourism event of the year.

Rodolfo López Negrete, Director of Consejo de Promoción Turística de México, said that hosting this event is key to increase tourist arrivals to Mexico because “in all the previous hosting cities, the Summit has been a watershed for local tourism industry, and we can assure that Mexico will have the same impact and success.”

Katyna de la Vega, Director of the Commission for the Development of Alternative Tourism in Chiapas, declared that more than 408 million pesos have been invested by the Chiapas government for the event.