Editor’s Note: This guest post by Jim Burnett was originally published on National Parks Traveler, and is reposted here with full permission.

Tusks such as these on elephants in the Ngorongoro Crater in Tanzania are a prime target for poachers. Photo by William Warby via flickr and Creative Commons.

Tourism is big business in Africa, and one of the major draws is the wildlife in the continent’s national parks. By almost any measure, however, the future of wild elephants in Africa is bleak unless major strides can be made against poaching fueled by the demand for ivory. There’s plenty at stake, for the African economy, the continent’s ecological balance, and more …. including the elephants.

Now a new campaign called S.A.F.E, (Safeguarding a Future for Africa’s Elephants) hopes to mobilize the tourism industry to help save the elephants. S.A.F.E., announced earlier this month by The Bodhi Tree Foundation (TBTF), is “an anti-poaching campaign aimed at galvanizing and uniting the tourism industry to elevate awareness of the current elephant poaching crisis.”

The extent of that crisis is described by the TBTF: “Poaching levels of elephants have continued to escalate, with tens of thousands killed annually in Africa due to the demand for ivory. In 2012, an estimated 35,000 elephants were killed, accounting for ten percent of the population, or about 100 per day. More than 90% of the African Elephant population has been slaughtered in the past 50 years alone.”

“At the current poaching levels,” the organization continues, “elephants in many countries risk extinction as early as 2025. The environments in which they live will become unsustainable. Travel leaders all over the world recognize the implications of this crisis and need to take action immediately. S.A.F.E. urges all to get involved.” 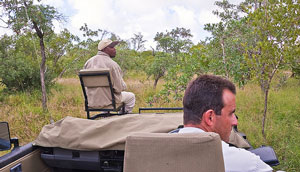 Wildlife tourism is an important part of the African economy. Safari vehicle with spotter and driver, Kruger National Park. Photo by John Hickey-Fry via flickr and Creative Commons.

We’d expect wildlife advocates and environmental groups to be sounding the alarm about the threats to elephants, but perhaps the reasons for a sense of urgency by the tourism industry might not be as obvious. TBTF Co-Founder Jena Gardner offers a sound explanation.

“Wildlife and tourism in Africa are interdependent,” says Gardner. “If not our industry to unite and help prevent this, then who? With so much vested and with a strong global voice, let us be the industry to be the first to take a stand, show we care and inspire other industries to follow.”

Tourism is a Key Component in the African Economy

A TBTF spokesperson offers some specifics on the potential impacts on declining elephant populations on both the tourism industry and the economy large sections of the continent.

“With 33.8 million tourists traveling to Africa in 2012, the loss of elephants has a tremendous impact on the global tourism industry and Africa’s economy. In countries such as Kenya and South Africa, where tourism is vital, millions of people employed directly or indirectly in tourism risk losing their livelihoods. With no wildlife to view, travelers will disappear and subsequently, safari lodges and African tour operators will not be able to survive. Local communities, many of whom are reliant on funds from lodges, will suffer and be unable to protect whatever wildlife is remaining.”

The relentless poaching of elephants is driven by a strong demand for ivory, with key markets located in China and the United States. According to TBTF, over 80% of middle class families in China admitted to purchasing ivory and intend to buy ivory in the future.

Consumer Education About Ivory is Essential

Wildlife advocates say a lack of information by those Chinese consumers compounds the problem: one survey found that many purchasers in China believe incorrectly that the tusks can be removed from the elephants without harming the animals. For U. S. markets, even though buyers may be less naive about the source of ivory, the opportunity to turn a profit or the perceived status of owning ivory art objects continues to drive demand. 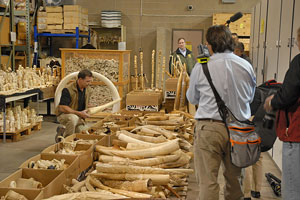 Illegal ivory seized by the U. S. Fish and Wildlife Service. Photo by Gavin Shire / USFWS.

TBTF says the illegal wildlife trade, valued at $7-10 billion annually, is the “fifth most lucrative and corrupt organized business in the world,” and the United States is reported to be the second largest market for illegal wildlife and its products. Referred to as “White Gold” due to its high value in the marketplace, ivory is now worth perhaps $1,500 a pound—more than the average annual salary in most African countries.

The Convention on International Trade in Endangered Species banned the sale of ivory harvested after 1989, but it is legal in the United States to sell ivory obtained before that date. The result is creation of two markets that authorities say make it very difficult to distinguish between legal and illegal stock.

Is a Total Ban on Trade in Ivory a Viable Strategy?

Given that challenge of separating legal ivory from contraband, and the financial incentives to view ivory as simply one more commodity with good potential for growth in value, some organizations have called for an outright international ban on the import or sale of raw ivory or even ivory products as the best solution. Thus far, that idea has failed to gain a lot of traction.

We described some of the issues surrounding elephants and ivory and the plight of forest elephants in particular in a series last year on the Traveler, and although the key issue—the demand for ivory—hasn’t changed, there have been some encouraging signs. 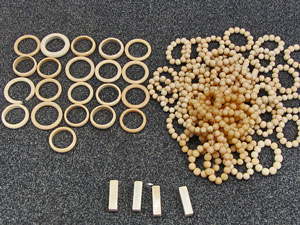 One strategy advocated by many organizations has been the destruction of stockpiles of illegal ivory confiscated by customs and law enforcement officials. Security and record-keeping for such stockpiles is costly and there has been some occasional “leakage” of confiscated ivory into the black market. Destruction is seen as a way to prevent such loss, reduce expenses for securing stockpiles, and most important, serve as a symbolic gesture to raise public awareness about the ivory problem.

Between 2011 and 2013, Kenya, Gabon, the Philippines and the Unites States burned or crushed their ivory stockpiles, and in January of this year, authorities in China’s Guangdong Province crushed more than 6 tons of ivory. Until recently, however, Hong Kong had resisted calls to join in this effort.

As one of the largest consumer markets for ivory in the world, Hong Kong remains a primary destination and transit region for trafficked ivory, so there was considerable interest surrounding a January 23, 2014, meeting of the Endangered Species Advisory Committee of Hong Kong’s Agricultural, Fisheries and Conservation Department. Hong Kong’s stockpile, estimated to be nearly 33 tons, is one of the largest in the world, and authorities there had rejected previous requests to destroy that inventory.

“Now is the time to decide on which side of the elephant’s history you wish to be,” Bergin said. “The survival of the African elephant is jeopardized by the world’s demand for ivory products. Nowhere are these ornate products more on display than in the storefronts and living rooms of Hong Kong.”

“No Unstained Ivory” in Today’s Marketplace

“There is no such thing as unstained ivory or the guiltless ivory consumer anymore,” says Bergin. “If you are buying ivory, you are fueling demand for the product and are therefore culpable in the decimation of the species. We are urging Hong Kong to use this moment in its history to send a firm, unambiguous message to ivory consumers, traffickers, and poachers that ivory has no value as a vanity object or as a tradable commodity. Only elephants should own ivory.”

In a bit of a surprise to many, the Hong Kong committee agreed to destroy most of the region’s stockpile of ivory, and conservation groups hailed the decision as an important step toward protecting elephants worldwide.

“On behalf of the African Wildlife Foundation (AWF), I welcome today’s decision by Hong Kong’s Endangered Species Advisory Committee to destroy most of the region’s stockpile of ivory,” said Dr. Bergen,” and I commend the Committee for drawing attention to the devastation wrought on wild elephants, particularly in Africa, by the ivory trade.”

The Culture of Ivory Worship 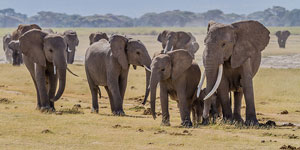 Will even small herds of wild elephants, such as this one in Kenya’s Amboseli National Park, become a thing of the past? Photo by blieusong via flickr and Creative Commons.

“The culture of ivory worship in Hong Kong is deep-rooted and centuries-old, which makes the decision to destroy any ivory, much less an estimated 33 metric tons, that much more extraordinary,” Dr. Bergen continued. “The public destruction of Hong Kong’s stockpile will raise awareness among ivory collectors and those who aspire to own ivory that their coveted product has a dark side, one that is connected to wholesale elephant slaughter, civil unrest, terrorism, and a complex supply network of criminals and corrupted officials.”

Is the tide beginning to turn in favor of elephants? The tourism industry hopes so, which brings us back to the S.A.F.E. campaign.

“With its primary goal to educate and raise awareness about the poaching crisis within the tourism industry and to travelers, S.A.F.E. also supports organizations that are currently making a big difference on the ground, but benefit from global exposure and funds. The Bodhi Tree Foundation has already committed and distributed the first $20,000 in grants to these organizations as part of the campaign launch.” The Foundation is asking the travel industry and travelers to visit the S.A.F.E. website to learn about ways to get involved and actively join the campaign.

From a practical standpoint, what can individual Americans do if they’re concerned about the future of elephants?

A major key to a long-term solution is changing attitudes about ivory. Ivory art objects from a previous era can be beautiful, and a good place to enjoy them is in a museum. If enough consumers quit buying ivory products, and collectors and investors will put their dollars into other commodities and types of art, perhaps future generations of travelers can enjoy seeing elephants in the wild.

It’s a decision that will be have to be made by all of us—individually and collectively—and sooner rather than later, if we believe that a wild and sustainable population of elephants should have a future in Africa.

3 Comments to Can the Tourism Industry Help Save Africa’s Wild Elephants?