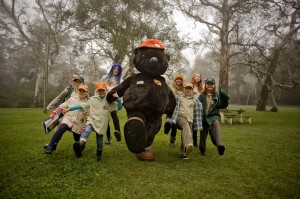 NPWS mascot Wanda the Wombat walking with kids at the launch of the Festival of Walking at Katoomba Cascades in the Blue Mountains National Park.

From the weird and whacky, educational, cultural and hard core fitness, this year’s Bicentenary Festival of Walking promises to include something for everyone.

To be held throughout the Blue Mountains, Lithgow and Oberon region from October 5 to 13, the action-packed festival will carry a Blue Mountains Crossings Bicentenary 2013-2015 theme for the duration of the three-year bicentenary.

“Many of the walks will focus on the history of the 1813 crossing with some even incorporating parts of the route the Blaxland, Lawson and Wentworth party took.

“This year’s program is so extensive that it will be impossible to choose just one walk. 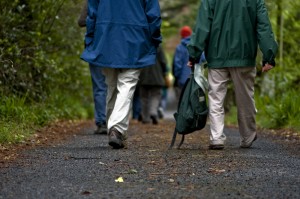 “Staying for two or three days will mean you don’t have to choose and can also experience the many other wonderful attractions, dining and accommodation options available in the Blue Mountains, Lithgow and Oberon region.”

A major highlight and prologue to this Bicentenary Festival of Walking will be the launch of the Ancestral Pathways Walk traversing 67km of the Blue Mountains from west to east following Aboriginal pathways, Mr Walker said.

While the seven days and six nights walk will be restricted during the day, anyone may join the group around the campfire each evening to share culture.

Affirming the ongoing presence of Aboriginal people in the mountains, the Ancestral Pathways walk will show how they maintain the connection by walking their country, looking after it and using it for cultural purposes.

“Like the Gundungurra Aboriginal Heritage Association, we believe that the best way to know Country is to walk Country,” Mr Walker said. 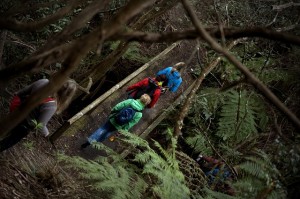 The festival finale on Sunday, October 13, will be a reconciliation walk at Mt York at Blackheath.

It is also intended that the National Parks & Wildlife Service will launch its new Six Villages Walk from Wentworth Falls to Mt Victoria.

“This will deliver to the region the world-class iconic walk the Blue Mountains has always wanted, an experience to rival anything found elsewhere in the world,” Mr Walker said.

BMLOT enjoyed partnering with NPWS and local councils and thanked Destination NSW for its funding support, he said.

The Bicentenary Festival of Walking is a celebration of the beauty of nature, the health and wellbeing benefits of walking, acknowledgement of Aboriginal custodianship and culture, and homage to the history, heritage and conservation of this special region.