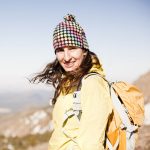 Chris was born and raised in New Jersey, and earned an undergraduate degree from Northwestern University in Evanston, IL. Soon after graduating, Chris realized that the eastern half of the continent wasn’t nearly wild enough, so she ventured over the Rockies and hasn't looked back. Since then, she has guided in various places including Denali, Canyonlands, Rocky Mountain and the Grand Canyon, and spent three years working in a wilderness therapy program with adjudicated youth.

Chris also earned her Master’s Degree in Conservation Biology from Utah State University and has worked for many years as an advocate for endangered species and wildlands. To this end, Chris co-founded Rios Libres, an organization dedicated to keeping rivers in Chilean Patagonia free from dams. Chris used her years of experience as an environmental activist and her way with words to help create a successful campaign that raised awareness and incited people to action. Chris and the crew at Rios Libres directed and produced two award-winning documentaries, Power in the Pristine and Streams of Consequence, which helped illuminate the issues threatening wild rivers and give voice to the Chilean people.

Chris has an intense reverence for nature and a thirst for adventure. She’s most at peace in the outdoors and considers a successful year one where she spends more nights sleeping under the stars than under a ceiling. She’s scaled peaks, including Denali (North America’s highest) and Mount Logan (Canada’s highest) and run rivers all over the US and in exotic lands like Nepal, Kenya, Tanzania, Thailand, Peru, Chile, Argentina, Costa Rica and Iceland.

Over the past few years, Chris has increasingly turned her attention to using words and imagery to document these adventures and to bring attention to important issues. She now works as the senior editor of Elevation Outdoors Magazine and is a freelance writer with works printed in publications including Climbing Magazine, Mother Jones, National Geographic Adventure, Filmmaker Magazine, Outside Online, WEND, & Women’s Adventure Magazine.

Filled with a growing knowledge, unceasing energy, and the passion to make an impact, Chris plans to continue telling important stories and protecting wild places.

Adventure.Travel, the branch of the Adventure Travel Trade Association for curious and mindful travelers, is going through changes in the new year. New website, new content, new inspiration. Adventure.Travel (say...

Creatives, activists, and visionaries from across the globe shared their expertise and passion with Adventure Travel World Summit delegates through an array of unconventional outdoor sessions — more than any...

New to the Adventure Travel World Summit this year, the Adventure Gear Trail featured 10 outdoor gear brands specializing in travel off the beaten path. Throughout the Summit venue, gear...

I roll in and out of the shadows lining the rugged path. A tricky mix of gravel and giant rock chunks makes it seem like my tires are rolling over...