Recognized For Its Wheels of Change Initiative That Sends Used Bikes to Africa, Converting Shipping Containers into Bike Shop/Rental Center 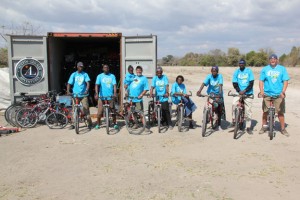 Billings, MT – Travel + Leisure magazine announced on Oct. 19, 2011, that tour operator Austin-Lehman Adventures (ALA) is a recipient of its 2011 Global Vision Award. ALA is the active travel company setting adventure vacations standards in The Americas, Europe, Africa and most recently, Cuba.

The award in the category of corporate innovation and community development recognizes the Austin-Lehman-driven program called Wheels of Change that from a collection center in Billings, MT, receives used bicycles for eventual delivery to African villages.

“This award is for everyone involved in Wheels of Change both in Montana and abroad where the tires ultimately hit the ground in Africa.  We are honored and appreciative of the recognition but our work has just begun,” notes Dan Austin, director of Austin-Lehman Adventures and founder of Wheels of Change (http://wocmontana.org/).

Austin points out that a bike can change a life in a poor country, but for millions of low-income individuals a new bicycle is financially out of reach. Wheels of Change helps coordinate and establish Bicycle Empowerment Centers throughout Africa to ensure that disadvantaged people have access to improved mobility, food and water, employment, health care, education, and social opportunities.

The project came about in 2010 when Austin realized that bikes used in its own domestic and international touring programs needed to be replaced. Along with an equal number of donated bikes he shipped them to Ngoma, Namibia, where his company operates a luxury wildlife tour. Here his team helped locals turn the used bikes into a rental and repair business operating out of a shipping container that carried the bikes. The shop became self-sufficient within 10 months, inspiring Austin to create the nonprofit Wheels of Change. The benefits are significant: 10 million bikes are discarded annually in the United States, and each can give someone in the developing world vital access to water, schools, jobs and medical facilities, he said.

The 2011 Global Vision Awards are featured online at: http://www.travelandleisure.com/articles/global-vision-awards-2011 and in the November issue of the magazine, currently on newsstands.

Nancy Novogrod, editor in chief of Travel + Leisure said, “It is always a source of deep satisfaction to see the dedication and inspiration our winners apply to preserving the world’s precious cultural and natural resources. These are not only our heritage, but a defining element of destinations and humanity.”