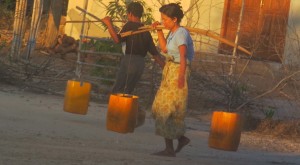 Finding adequate water in Bagan is a challenge. Picture credit

Whilst tourists come and go, villagers around the ancient city of Bagan in Myanmar need water wells to combat drought, debt and malnutrition

The jewel in Myanmar’s tourism crown is Bagan, an ancient center of power in the central Myanmar arid zone. The city’s power ebbed away in the 13th century due to Mongol invasions and political fragmentation

Today, Bagan only receives around 34mm of rainfall between January and April each year. This doesn’t deter tens of thousands of tourists who come to admire more than 2,000 sandstone temples built around 800 hundred years ago. Bagan is a UNESCO World Heritage site. It is, in the broadest sense, one of the wonders of the world. But one with very little water.

To honor World Water Day on 22 March, a modest water well building campaign has been launched by Khiri Reach, a chartable foundation that helps communities in and around destinations popular with tourists in Southeast Asia. The campaign is called, “Water for All in the Bagan Dry Zone.”

Two wells has been built in Bagan so far. Two are under construction. And at least three more are planned in 2015. The target is 10 in total. Feedback from villagers has been encouraging.

U Swe Oo and Daw Kyu Kyu Khing, a couple from Kyauk Kone village in the dusty Bagan plain, can see improvements to their lives. “Previously there was no well in the village. To get water it would take about one hour by ox cart,” said Daw Kyu Kyu Khing. “Now they are so happy to get water close to home from the well. It’s good for the whole community especially for the weakest and the poorest people in our village who sometimes can’t afford to rent an ox cart to go and fetch water.”

U Tun Tun, chairman of Mya Kan village, where the other well is, said: “We are so happy to get fresh water from the well. It saves us a lot of time and energy.”

The ground water level is very deep in this area (about 650feet/200m). Therefore, the costs of a well (including water basin and equipment) are about US$1700-US$2000, a fortune for the villagers.

However, a German family traveling with Khiri Myanmar donated cash for the first well. Khiri Myanmar donated US$1 from every tourist it took to Bagan in 2014 for the second well. A Dutch family and Riksja Travel, donated a well too. With support of various travel organizations and individual travelers, Khiri Reach plans to build more in 2015.

To find out more about the challenges of living in the Bagan dry zone, there are three informative articles: more than 25% of the children in the dry zone suffer malnutrition; the impact of erratic rainfall, frequent droughts and farmer debt; and young people faced with environmental challenges moving out.

The Khiri Reach ambassador who oversees the project, Su Mon Latt, said: “We wanted to contribute to the people of Bagan as much as we could. Khiri Reach believes that water is essential to human health and should be accessible to all. We can’t thank our donors enough. They share the same beliefs and extended their generous support.”