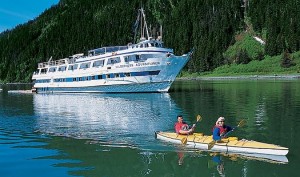 Tahoe City, CA–AdventureSmith Explorations, the active travel company that secures matches between adventure-seeking clients and a treasure trove of small, expedition ships returns to the Alaskan wilderness in the summer of 2011 with two newly renovated ships and a variety of unprecedented off-ship activities.

The redesigned vessels now in place for next summer are the same pioneering small ships that AdventureSmith Explorations founder and president, Todd Smith, helped design and direct during their first deployment to Alaska in the 1990s. They were the first cruises of their kind to offer enough kayaks and gear to accommodate every passenger during off-vessel wilderness activities which evolved to become the primary focus of today’s adventure cruise.

“When these ships (the M/V Wilderness Adventurer and M/V Wilderness Discoverer) were pulled in 2005 there was a void in adventure cruising in this region,” said Smith. “It’s beyond exciting for me to be involved in their re-launch with InnerSea Discoveries and to help design and expand off-ship programs to include never-before offered activities.”

For the first time, guests will be able to pick and choose from traditional included activities such as in-depth wilderness explorations by zodiac, kayak or naturalist guided walks, to new, ground-breaking optional activities such as overnight wilderness kayaking, hiking and camping, expert fishing charters from the ship (local guides/boats rendezvous with the vessel to take clients fishing for the day) and flight-seeing. There will be some new activities included in the programming as well such as paddle boarding, caving and snorkeling.

The new program has several advantages over the original adventure cruises. The ships which used to carry up to 88 passengers will operate with a maximum of only 49 passengers. This will provide more space on board and allow for more time to engage in off-vessel activities. The ships are now being completely refurbished with new amenities such as an on board sauna and hot tub with a view, exercise equipment, on-deck yoga classes, massage services (additional charge) and TVs with DVD players. Guests with flip and video cameras are encouraged to film daily activities, later to be shared via video monitors in the main salon or streamed into cabin TVs during social hour before dinner or afterwards.

Also included in the re-fit will be bow-mounted underwater cameras to pipe in images from below the waves into the main salon’s flat screen TVs and into cabins via designated channels.

Two 7-night/8-day itineraries planned for the 2011 season will actively explore the Eastern and Western Coves of southeast Alaska’s Inside Passage. The independent itineraries can be combined for a longer cruise. Singly or together they provide a comprehensive overview of this state’s primal wilderness that can only be accessed by small vessels. This means that discerning guests will be far removed from large cruise ship crowds.

Smith has been intimately involved in the relaunch, consulting with InnerSea Discoveries (owner of vessels) on the cruise itineraries and on-board and off-ship adventure programs that take the original concept of active cruising to the next level.

The upcoming programs start at $1,795 per person for a 7-night/8-day cruise. There are also dedicated family departure dates.