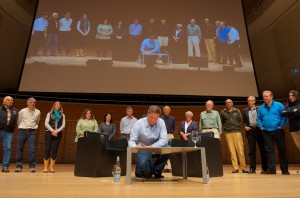 Surrounded by the ATTA Advisory Board, Shannon Stowell signs The Code in Lucerne in October 2012, making the ATTA the first U.S. based association to sign.

Seattle, WA  – This January the Adventure Travel Trade Association (www.adventuretravel.biz, ATTA) became a Top Member of The Code, an international initiative to provide awareness, tools and support to the tourism industry in order to combat the sexual exploitation of children in contexts related to travel and tourism. The ATTA was the first U.S. based association to sign The Code in October 2012 at the Adventure Travel World Summit in Switzerland.

“You may ask, ‘Why does it matter to be a Top Member of The Code?’,” said ATTA President Mr. Shannon Stowell. “It matters because we must all work together to eliminate sexual exploitation and trafficking of children at the hands of the tourism industry. It should be global zero tolerance and as an association, we’re proud to take this stand.”

To earn top member status, The Code requires completion of its six criteria:

In 2013 the ATTA took the necessary steps to become a Top Member by:

The ATTA looks forward to continuing efforts to educate members and support The Code and its cause. Learn more about The Code at www.thecode.org.