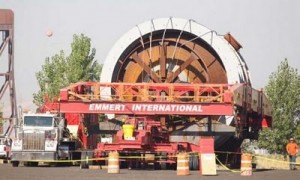 Missoula, Montana — The Board of Directors of Adventure Cycling Association — the largest cycling membership group in North America and headquartered in Missoula, Montana — has voted to oppose the planned mega-load shipments of oil industry equipment on rural highways in Idaho and Montana. These highways — including Highway 12 in Idaho and Montana and Highway 200 in Montana — are part of Adventure Cycling’s most iconic bicycle routes, including the TransAmerica Bicycle Trail, the Lewis & Clark Bicycle Trail, and the Great Parks North Bicycle Route.

Adventure Cycling is especially concerned about the impact of the planned mega-load shipments on the rural character of these highway corridors and on the riding experience for cyclists on roads and associated facilities that will be drastically changed to accommodate the mega-loads. Adventure Cycling has also raised concerns about the mega-loads’ threat to the sustainable tourism and travel economy that is emerging and growing along these highway corridors.

Before taking its position to oppose, Adventure Cycling submitted comments in May 2010 to the Montana Department of Transportation (MDT), asking for a more rigorous federal environmental impact study of the proposed mega-load shipments.